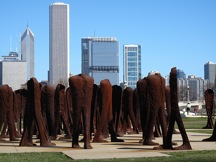 When an egent crosses from the private into the public sphere, s/he has entered into the civic sphere. The civic sphere of literacy is thought to have been “necessarily destroyed” by the society of the spectacle (p. xi). However, Ulmer contends that “a wedding of the Internet and tourism promises the formation of an international civic sphere” (p. 12). Indeed it is the EmerAgency’s function to put “spontaneous mourning behavior into relationship with school research” thus creating a wide-reaching public sphere (p. xv).

The civic sphere is key for effecting change in a culture. Reminiscent of McLuhan's global village, the civic sphere holds the promise of leaving behind our postmodern form (a collection of separate parts) and finally becoming whole. The civic sphere is what the egent enters into and simultaneously seeks to change.

To the Next Collection

Back to the Front Page