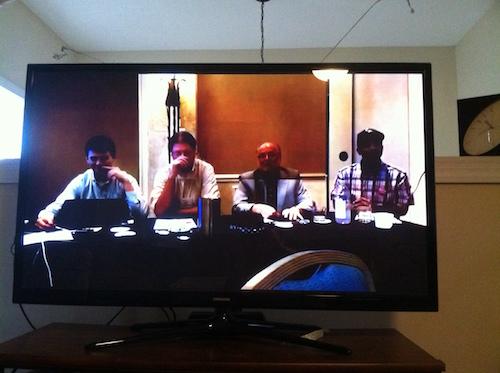 The four panelists at A.34: Steven B. Katz, Michael Utley, Matthew Osborne, and A.D. Carson

I am pleased to write a review of this panel, which I virtually attended. This panel was streamed live as well as presented to a live audience. The access that this blended format allowed provided a lively back channel discussion and an avenue for audience engagement beyond those immediately present in the room. In addition to having the opportunity to ask the panelists questions or make comments, I was able to discuss the presentation in a chat box (a private team chat medium) as the presentation unfolded.

Steven Katz set the stage for what would be a dynamic and diverse panel presentation by playing his guitar and demonstrating different research perspectives through the motif of music. As Katz played, he jokingly asked the audience for requests. An obliging audience member ironically suggested, “Freebird!” Katz, like the guitar shop employee in Wayne’s World, politely intoned “no Freebird.” This moment set up the panel nicely, as the remaining panelists each took a very different and constructively irreverent approach to discussing themes of pedagogy, music, and epistemology.

Katz recommenced the presentation in his momentary conclusion by taking off his guitar, setting it at the front of the room, and declaring it to be a symbol of “what used to be.”

Michael Utley then clearly introduced his alignment with a punk rock ethos. By highlighting a sticker that quipped, “Old Punk Rockers Never Die…We Stand in The Back”—because the front “is a relatively dangerous place to be”—he presented this position as a representation of his role as a researcher and enthusiast of a punk rock lifestyle. Utley moved on from his opening salvo of punk by highlighting one of Geoffrey Sirc’s (1997) quotations from “Nevermind the Tagmemics” saying, “Punk can disgust, sure, but so can we. Even at its most repellent, punk threw unavoidable questions right back” (p. 14).

Utley positioned Sirc as the first in composition studies to suggest punk rock was a “tool to inform…rhetoric and composition pedagogies.” Utley, having grounded his position, began to explain that punk rock is experiencing a resurgence in popularity due to new books about the 1980’s punk scene and Martin Scorcese releasing a docudrama about the Ramones. Because of these events, Utley argued, “It seems appropriate then to re-visit Geoff’s work to recognize its continued relevance today and perhaps re-ignite a call for different kinds of thinking about our composition pedagogies.”

Throughout his presentation, Utley referenced the imperfections often found in punk rock. Utley cited Sirc who, citing Deemer, argued, “let the teacher ‘shock’ the student ….let him discuss theology to Ray Charles records.” Or, in this case, Utley argued, “let him discuss psychology to Black Flag records.” Using modern digitized or auto-tuned music as a counterpoint, Utley explained that “under closer scrutiny, punk rock—and indeed many other genres of music—can provide fertile ground for mining essential—and quite interesting—material, which we can present to our students. The ugly can be the inroad to engagement.”

Utley explained that many pedagogical writing practices are geared toward helping the student attain mastery. Utley also explained that the practice of crafting perfect material (be that music or writing) causes us to lose the value in imperfection. He then rhetorically inquired, “Aren’t the imperfections that which define us?” Utley again referenced Sirc (1997) who noted, “Punk didn’t discard the pre-writes, jotted notes, general ideas—It lived off them” (p. 13). Utley suggested that composition pedagogy might be able to help students use some of that which would normally be discarded.

Utley signaled that a punk rock pedagogy would be repulsed by Standard Written English. He pointed to Sirc (1997) asking why we should “train students for the future when there is no future?” (p. 14). He continued citing Sirc (1997) to explain that “punk is not a helping discipline” that seeks reform, rather punk seeks to “re-form” (p. 14). Utley argued that helping students to value the parts and pieces of their work (in keeping with punk’s Do-It-Yourself ethos) would be a primary goal of punk, and thus should be a goal of the pedagogy he describes.

With regard to aesthetics, Utley pointed to Jamie Reid, the Sex Pistol’s graphic designer to explain that a cut-up-remixed object might be desirable. Though he did not explain it explicitly, the concepts of inside and outside were prevalent throughout Utley’s discussion. As a rule, Utley seemed careful to distance punk rock from dominant culture; that, instead it created a stance of relations. Running contra to contemporary pedagogy, it seems that Utley’s punk pedagogy would largely do the opposite of whatever was generally accepted, just so the differences could be explored.

In concluding his presentation, Utley showed awareness by acknowledging that many people may not prefer punk or any other kind of music (whatever their taste may be), and in so doing, he explained that one of his larger arguments is the potential of music to inform teaching practices. This functioned as a nice segue to Matt Osborne’s presentation on electronic dance music, and A.D. Carson’s work with hip-hop.

Osborne situated his research, generally, in an area that is concerned with “the relationship writers have with writing and with the information they are creating.” He specified that he is particularly interested in moving toward ways of “seeing, hearing, and feeling these relations anew.” Osborne cited Katz to explain that the main idea of his work is not to map out rhetoric of aurality or of the sonic, but rather that he preferred an understanding of rhetoric and composition as being musical.

Osborne opined that sonic rhetoric has the potential to allow for new methods of engaging with “information, experience, art, and argument, which oscillates between intelligible and sensible registers.” Along with the Jody Shipkas and Cynthia Selfes of the multimodal compositional world, Osborne pointed toward Jeff Rice’s work in exploring rap music’s practice of sampling to consider notions of rhetorical invention, as well as other works by Michael Jarrat and Bryon Hawk.

Osborne continued to advance his arguments by citing Thomas Rickert’s (2013) Ambient Rhetoric to explore the ideas that sound (especially ambient music, in this case) can allow a displacement of intentionality, and can allow individuals to begin to value the unconscious phenomena (among other phenomena). Dubstep music therefore became one of the main objects of inquiry in Osborne’s presentation. Ultimately, Osborne’s presentation provided interesting ways of examining understanding, sensibility, aesthetics, and affect.

As he briefly cited a history of dubstep music, Osborne quickly moved past Skrillex and towards artists such as Datsik, Bare Noize, and Butch Clancy. He situated Dubstep in the genre  of electronic dance music (EDM), which features “novel timbres and textures” rather than the emphasis on “melody and tonic progression…typical of popular Western music.”

Osborne keenly pointed out that the appeal of this music is the distinction “among points of stasis and divergences.” Osborne used this distinction to signal a relationship between “regularity” and “novelty.” While he noted the “disarray of textures present,” he also noted the “dependable rhythm for the sake of dancing.” The relationship between the novel, which defies the user/audience, makes for an interesting counterpoint against the dependable for the sake of dancing.

Osborne pointed to the scholarship of Katherine Fargo Ahern and Steph Ceraso, which considers the way that sound can interface with the composition classroom. Ahern developed a notion of tuning that deals with the ways that sound, understanding of sound, and the phenomenological ways of perceiving sound are related. Osborne pointed to Ceraso’s notion of listening as a multisensory act—a way of moving beyond “ear-centric” models of hearing, and emphasizing the embodied experience of listening. Osborne explained that “both Ceraso and Ahern posit not compromises or middle grounds but oscillations between poles they argue are not mutually exclusive after all.” Osborne related this oscillation to the dubstep concept of the wobble.

Osborne explained that this wobble can be created by using a technique called low frequency oscillation, which is like sweeping the dial on a stereo between “low, middle, and high.” The wobble, Osborne stated, becomes a metaphor for experiencing sonic rhetoric as it takes place in the field of composition. Ultimately, Osborne argued that these methods allow for clear encounters with the affective possibilities of sound and composition. Noting that the argument moves beyond sound and into more mainstream discussions of aesthetics, Osborne pointed out the stretching of such practices provides interesting opportunities for scholarly inquiry. Osborne concluded rhetorically, observing, “If, as the jazz composer David Baker maintains, the theory of arts follows their practice, this might be something to keep in mind when someone enters an academic forum and asks you to listen to weird music.”

In the final presentation, A.D. Carson began by introducing his presentation as being “a rap on rap through rap.”

As the opening strains of Dixie played, Carson jokingly asked the audience if they know this song, and he explained that he lives in Clemson, South Carolina. As Carson's work relates to portrayals of history and particularly notions of racial equality, the song Dixie is an interesting choice in opening Carson's performance. As the song Dixie is often associated with the South and invokes connotations of the Confederacy, it provides a profound counterpoint to Carson's message. As the fiddle continued to drone Carson explained that his presentation was “An LP’s worth of stuff in an EP, so that’s happening—right now.” Carson largely left interpretation of his presentation, which can be viewed in the video linked above, up to the audience. Readers might also be interested in additionalaudio works by Carson.