Friday morning at CCCC 2015 started with a sonic explosion! Even before the panel began, Kyle Stedman sent a tweet: “37 seconds of what you’ll hear in #F19 at #4C15” (CCCC 2015 Promo). The sound collage is a shorter version of a ten minute montage that panelists played for the audience. By opening with a listening exercise and situating each presentation within temporal locales, the panelists enacted their arguments about aurality and temporality while offering attendees new ways to consider risk and reward in sonic composing practices. 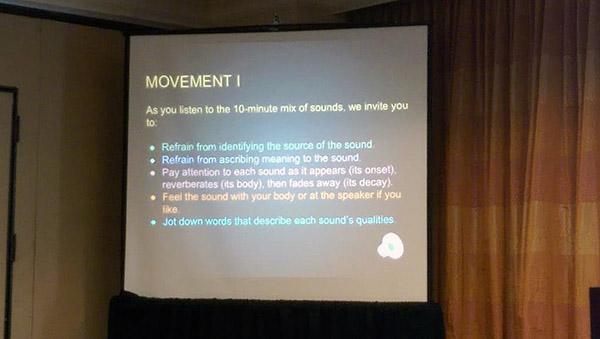 Image of a projected slide that reads: MOVEMENT 1: As you listen to the 10-minute mix of sounds, we invite you to: •Refrain from identifying the source of the sound. •Refrain from ascribing meaning to the sound. •Pay attention to each sound as it appears (its onset), reverberates (its body), then fades away (its decay). •Feel the sound with your body or at the speaker if you like. •Jot down words that describe each sound’s qualities.

During the introductory segment, we listened to a ten-minute mix of sounds and read instructions from a handout and a visual presentation. The presenters invited us to refrain from identifying the source of the sound, ascribing meaning to the sound, or paying attention to each sound as it appeared (its onset), as it reverberated (its body), and as it faded away (its decay). Instead, we were to feel the sounds with our body or listen at the speaker if we liked and jot down words that described each sound’s qualities. This audiovisual engagement with alphabetic literacy was an enjoyable, rhetorically effective approach to sonic composing as a process-based practice that teachers can replicate for the writing classroom. This entire presentation was incredibly accessible and bursting with take away information. The presenters even gave us a handout containing a transcript of the entire panel in a large font for accessibility.

After actively participating in our own sonic composing practices, we were able to engage with each speaker’s presentation from a fresh, rhetorical perspective. Movement II contained the panel proper, and each panelist encouraged us to follow along with the script and projected slides. Composed like a symphony, this panel moved attendees through brisk and slow tempos in playful compositions that culminated in a final movement.

Michelle Comstock introduced this movement, which was marked allegro: at a brisk tempo. She reminded us that when thinking about global issues our minds often conjure up visual imagery. “Images showing toxicity in the ground, water, and air make the invisible visible and thus more material—a necessary move for mobilizing at risk populations.” Comstock then posited that sonic information “is rarely considered a rhetorical resource for communicating the ongoing effects of extinction.” She referred to Maureen Daly Goggin’s (2009) introduction to Women and the Material Culture of Needlework and Textiles, stating that “sound has resisted our largely print based methods of analysis” despite the material turn within rhetorical studies. This presentation explicated lyrics and soundbites as texts and encouraged the audience to understand the usefulness of sound in our current moment of climate change, loss, and extinction in the so called “Anthropocene Age.”

Mary Hocks’ presentation changed the tempo to adagio, which is a musical direction that means to slow down. Slowing from the panel’s sonic explosion in order to look closer at sonic composing practices, Hocks said she wanted to extend what Comstock just described into other rhetorical contexts. To do so, she shared several questions:

Hocks asked us to think about musical and recording processes as sonic rhetoric through the perspective of a music producer. She said, “reduced listening helps listeners learn to deconstruct layers of sounds, locations of sound, and sequences of sounds over time. This multidimensional process can be examined and illustrated by the rhetorical work of composing and recording music.” Her title hints at one of the texts she played for, and examined with, us: the audio from the Saturday Night Live comedy sketch “More Cowbell.” The phrase has circulated through pop culture as that magical ingredient needed to perfect something within a composition. According to Hocks, the skit’s setting “depends upon sonic meaning and plays up the dynamics of this rhetorical situation.” Later, she compared the skit’s setting to that of a real studio by using quotes from her conversation with professional producer, engineer, and musician Chris Rosser.

Kyle Stedman’s presentation is scherzo, a light or playful composition (e.g., comprising a movement in a symphony or sonata). Stedman took the role of rhetorical-musical historian with a dynamic presentation; for each segment he would play music for the audience and then read a personal narrative from the composer’s perspective. This sonic composing practice situates each composer or sonic rhetor within her historical and sociocultural milieu:

This presentation also involved multimodal engagement with the audience. Through reading aloud, role playing, gesturing, and performing, the panelists and attendees interacted with the various texts provided for us. Stedman connected these sonic-literacy narratives to our own personal stories so that we could hear ourselves in the voices of other composers.

Crystal VanKooten’s presentation is rondo, a musical form with a recurring leading theme that is often found in the final movement of a sonata or concerto. Her presentation shared preliminary results of a study she conducted “that looks into how student composers are using music and sound to compose in FYW (first-year writing), specifically within multimodal assignments such as video composition assignments.” Ultimately, she found that her students were using music in layered and complicated ways; however, the students frequently did not have the necessary vocabulary to discuss their choices and processes. Sonic literacy is certainly an important facet of 21st century composition.

Overall, this panel offered attendees fresh perspectives and helpful approaches to sonic composing practices; the presentations respond to Kathleen Blake Yancey’s (2004) CCCC keynote address “Made Not Only in Words: Composition in a New Key” and answers Cynthia Selfe’s (2009) call for scholarly discussions about aurality. I also participated with this panel in other discursive ways through Twitter and Storify. Several attendees and some of the panelists exchanged tweets, so I used Storify to capture and archive our fascinating digital conversation. 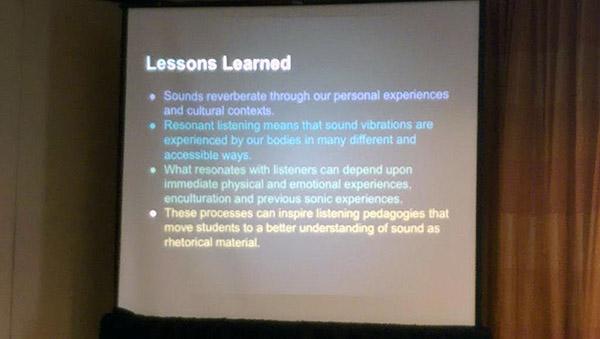 A slide that reads: Lessons Learned •Sounds reverberate through our personal experiences and cultural contexts. •Resonant listening means that sound vibrations are experienced by our bodies in many different and accessible ways. •What resonates with listeners can depend upon immediate physical and emotional experiences, enculturation and previous sonic experiences. •These processes can inspire listening pedagogies that move students to a better understanding of sound as rhetorical material.