About the Action Hub

At the 2015 conference, Chair Joyce Locke Carter developed a number of new initiatives. These initiatives reflected one of Joyce's overarching goals for the conference, to "create as many spaces and times as possible for you and the rest of our members to engage each other, to question each other." The Action Hub was one of these initiatives, located in the Tampa Convention Center's Ballroom B, just next door to the Exhibit Hall and conference registration. Throughout the conference, it housed the Computer Connection, Digital Pedagogy and Undergraduate Research Poster sessions, and a number of new initiatives; it served as a space for attendees to solicit feedback on other projects that didn’t fit neatly into existing workshop and panel structures. Also, ongoing, interactive projects like C's the Day, the Digital Archive of Literacy Narratives, and 4C4Equality (4C4E) flanked the Action Hub's entrance. In my opinion, it was a wonderful addition to CCCC 2015 and emblematic of the tremendous care with which Carter led the conference. I spent most of my time at CCCC in the Action Hub where I met amazing colleagues, and I got to talk to them about my work as a 4C4E organizer and learn about their social justice, service, and engagement work.

For those of you who are unfamiliar with 4C4E, I should probably provide a bit of background. 4C4E started as an Indiana-based group that emerged in response to a discussion on the Writing Program Administrator’s (WPA) listserv in Fall 2013. This discussion weighed the merits of boycotting the 2014 Conference on College Composition and Communication (CCCC 2014) due to Indiana legislation proposing a constitutional amendment to outlaw same-sex marriage. Because members of the initial group were all residents of Indiana who supported civil rights for LGBTQ Hoosiers, we felt that a boycott made little sense. For months, organizations such as Freedom Indiana and Indiana Equality had been organizing throughout the state to oppose the constitutional amendment. We decided it would be better to intersect with and support such work, so we developed tactics to leverage the social and economic power of the CCCC membership to do so. 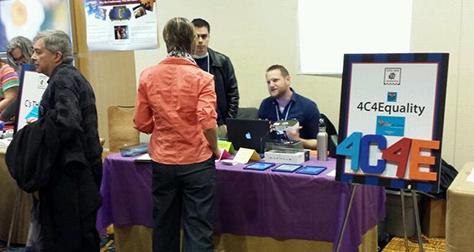 Throughout CCCC 2014, faculty and graduate students staffed a table stationed outside the exhibit hall with information about the amendment and materials to help conference-goers demonstrate opposition. These materials included buttons and stickers to be worn throughout the conference in order to draw attention to the fight against the constitutional amendment and support LGBTQ rights; iPad minis displaying a Google map of local, LGBT-owned and -friendly businesses near the conference site that we encouraged attendees to support; business cards featuring a short statement in support of marriage equality and LGBTQ rights in Indiana; and digital maps from Refuge Restrooms, which we added to the locations of gender-neutral bathrooms near the conference site. Our work at CCCC 2014 was an incredible success. We met many supportive colleagues from all over the country who were engaged in like-minded work, and the experience emboldened us to continue our work at CCCC 2015. 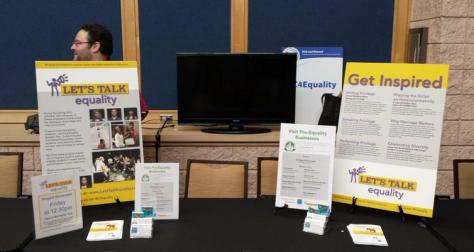 Developing similar work in Tampa, Florida, meant rethinking the initiative as a network and establishing partnerships locally and throughout the field. While we wanted to continue conversations about how academics might bring attention to local issues evident in CCCCs host cities, we wouldn't be locals this year. Instead of dictating what issues conference-goers should give attention to in Tampa, we connected with professors, instructors, and undergraduate students from the University of Tampa and worked to support their ongoing project, Let’s Talk Equality. This project involved students in first-year composition, speech, and filmmaking courses addressing issues of privilege, difference, and same-sex marriage in Florida. This partnership culminated with a presentation in the Action Hub on Friday, March 20, 2015. This presentation included discussions from UT faculty members and students, and screenings of some of their projects. 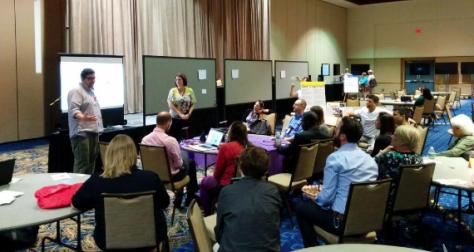 Additionally, 4C4E supported a new initiative at CCCC 2015 called Writing for Change. Spearheaded by Kristen Moore from Texas Tech University, Writing for Change engaged with conference-goers about how they use research and teaching to address and initiate change, broadly conceived. Writing for Change set up a station in the Action Hub where conference-goers could document their work on whiteboards, take photos, and share their commitments to Writing for Change on Twitter. In an effort to bring together scholars engaged in service learning, civic engagement, and social justice work, 4C4E and Writing for Change also recorded interviews with a number of conference attendees about the work they do in their local communities. These videos and related materials will be made available on the 4C4E website in Fall 2015. 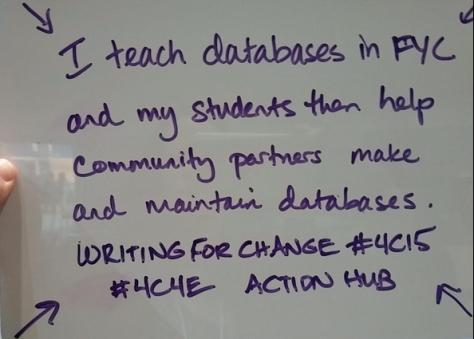 Building for Houston and 4C16

As a teacher–scholar involved in service and engagement work, I am excited about the CCCC 2016 conference theme—Writing Strategies for Action. Because of its focus, I hope this means that the Action Hub will continue and expand as conference-goers consider how they can make the conference more conducive to their teaching and research goals. If the Action Hub becomes a conference feature, I strongly encourage you to incorporate it into your experience in Houston, Texas.