This introduces a unit from an advanced undergraduate course in style and technology. I frame the assignment, articulate a rationale for using stylistic principles to link prose discourse and new media genres, and feature an imagetext, a comic, and a Twitter stream—all pieces developed for the unit.

“Most talk about style, by professional critics as well as amateurs, leaves much to be desired: it is often subjective, impressionistic, unhelpful, sometimes misleading” (156)—Virginia Tufte, “The Relation of Grammar to Style”

With Tufte’s provocation in mind, I developed an assignment concerned with the e x t e n s i o n of stylistic qualities from prose through new media. The assignment is called 3.33 Ways to Digital Style. Why three? Students choose a three-paragraph passage of nonfiction prose and, keying on identifiable stylistic qualities in the original, remake the passage three ways with the aim of intensifying, and thereby rendering more conspicuous, particular rhetorical effects. Why one-third? One-third is a repeating number; it enlists a “viniculum” or overline to indicate its patterned recurrence. The assignment brings to light a similar logic operating in stylistic continuations arching across the prose to new media remakes. A five-minute, image-intensive Ignite-style presentation caps the assignment.

An experiment forty years ago...

...further defines the pedagogical motives behind this project. Tufte writes,

Without preferring a monolithic framework for style, 3.33 Ways draws some of its impetus from the problem of terminological fray suggested by Tufte’s experiment. That is, I want the writers and soon-to-be-teachers of writing who undertake this project to consider where their style vocabularies come from. Rhetorical tropes have proven useful in this context for identifying and experimenting with stylistic tracings among media, both conceptually and practically.

I first developed 3.33 Ways to Digital Style for ENGL328: Writing, Style, and Technology, a writing-intensive course I teach regularly at Eastern Michigan University. The course enrolls undergraduates from a wide variety of majors and minors, including our major in Written Communication and our Writing Minor. Nearly half of the students in any section of the course are pre-service teachers who will soon be student-teaching. The triple-focus on writing, style, and technology is at times difficult to juggle. Remake-based assignments like this one, however, create explicit alignments between style for prose and style for new media that accord with the goals of the course. Across multiple scales, considering style first as a family of tropes introduces a durable framework that effectively holds together writing, style, and technology.

Here's how the assignment builds...

1. Select
Following a period of exploration, students select a three-paragraph passage of non-fiction prose. They will be working extensively with their respective passages, so I encourage them to follow their interests and choose carefully. The passage should pop with stylistic depth and dimension, e.g., identifiable syntactical patterns or rhetorical tropes. Paragraphs must be sequential, but no other conditions apply (i.e., they may be any length).


2. Style
Our inquiry into style opens with nine rhetorical tropes elaborated in Crowley and Hawhee’s Ancient Rhetorics for Contemporary Students: onomatopoeia, antonomasia, metonymy, periphrasis, hyperbaton, hyperbole, synecdoche, catachresis, and metaphor. Students already know some of these by name (e.g., metaphor); others are familiar as concepts although they have not encountered by name (e.g., periphrasis). This preliminary enframing of style gradually expands to include other terms and concepts related specifically to syntax analysis (for description and revision), Twitter, imagetext, and comics. After charting tropes and other stylistic qualities operating in the prose passage, students select three out of four remakes to create.

What could the passage look like as a series of tweets? Guided by this question, I ask students to notice how stylistic knowledge proliferates in Twitter. They remake the three-paragraph passage into a series of ten tweets making use of @-directed messages, hyperlinks, and #hashtags. The remake is informed by existing experiments in Twitterature (i.e., literary works recast as tweets), although this slice of 3.33 Ways is more akin to Twitterary nonfiction. Selected reading from Dom Sagolla’s 140 Characters: A Style Guide for the Short Form (2009) supports this portion of the project. For example: RT @joelsalatin Whole Foods is the face of "the organic empire." 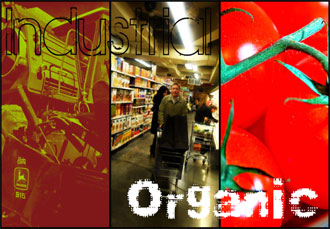 Imagetext Triptych
The three-panel imagetext triptych magnifies the stylistic effects of photos+filters and words+typefaces. This remake takes shape after reading Anne Wysocki’s article “Awaywithwords” and watching the 2007 documentary Helvetica. We select photos from Flickr Creative Commons (which includes a mini-lesson on copyright) and create the triptych using image-editing and collage tools available in Picnik.com.

Along with each remake, students develop a ±200-word comment that explicitly accounts for their decisions, technical processes, and stylistic intensifications (or transformations). Remake notes should also name and explain the focal tropes suspended across this design-minded integration of imagetext, filter, and typeface. 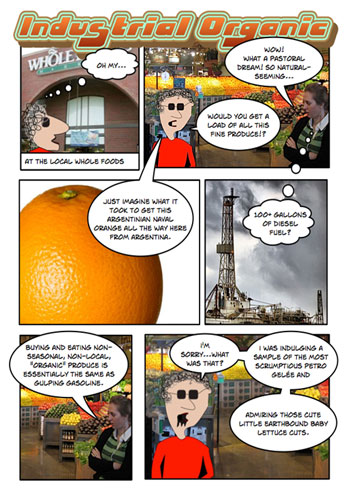 Web Comic
The web comic remake is informed by the first chapter in Scott McCloud’s Making Comics (2006), “Writing with Pictures: Clarity, Persuasion and Intensity,” in which he explains a delicate balance comic creators must achieve between intensity and clarity. McCloud also identifies five choices integral to communicating with comics: moment, frame, image, word, and flow (37). In addition, we find remake techniques in Matt Madden’s 99 Ways to Tell a Story (2005), a comic-modeled variation on Queneau’s Exercises in Style (1947/1981). Queneau’s “Oulipo logic,” or invention by constraint underpins the remaking process enacted in the comic version of the passage as well as the other three options.

To produce the comic, students may combine photographs and word or thought bubbles using Comic Life (left). In recent semesters, some have also hand-drawn comics or used free, template-based platforms, such as Pixton.com and Bitstrips.com.

A syntax analysis remake methodically breaks down the prose passage into individual sentences, then subjects the sentences to a blend of analytical treatments adapted from Richard Lanham’s Paramedic Method and Virginia Tufte’s “Short Sentences” chapter in Artful Sentences: Syntax as Style (2006). The point of syntax analysis, in this case, is to zero in on structural patterns that typically go unnoticed—patterns in preposition usage and frequency, in verb forms, in the locations and complexity of subjects, and in the lengths of sentences.

Here's an example: Para. 1, Sentence 6: Tremendous warehouses buy produce/ [for] dozens/ [of] stores/ [at] a time,/ which forces them/ to deal exclusively/ [with] tremendous farms. (20 words) 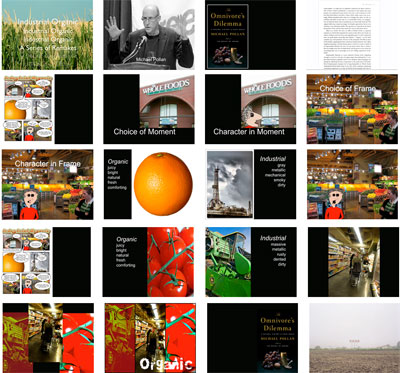 4. Deliver (Ignite-style)
Near the end of this six-week project and after reading selections from Garr Reynolds’ Presentation Zen (2008), students deliver Ignite-style presentations to the class. These five-minute presentations introduce transformations of the three-paragraph passage. Students may include discussion of the passage’s context, the stylistic qualities of the passage, the remakes, and the decisions they made as they re-created the passage three ways. Student-authored PowerPoint slideshows consisting of twenty slides each set to rotate automatically after 15 seconds accompany each presentation. Individual slides may not include more than five words. Slides should include images (i.e., these are visually intensive presentations, not text heavy slide-documents). Students may use up to five index cards; however, they are strongly encouraged to present extemporaneously rather than reading from a script.

Access the assignment, schedule, and bibliography online at http://goo.gl/tWdHC

The closed captioned YouTube audio supplements linked via the poster's QR codes are assembled at http://goo.gl/TQXWy

For more information or conversation about this work, please contact me at derek.mueller@emich.edu.